Looking for a New Old House?

Americans fed up with over-sized, over-designed McMansions are finding saner shelter in houses 'historic" on the outside—but full of walk-in closets and modern kitchens within 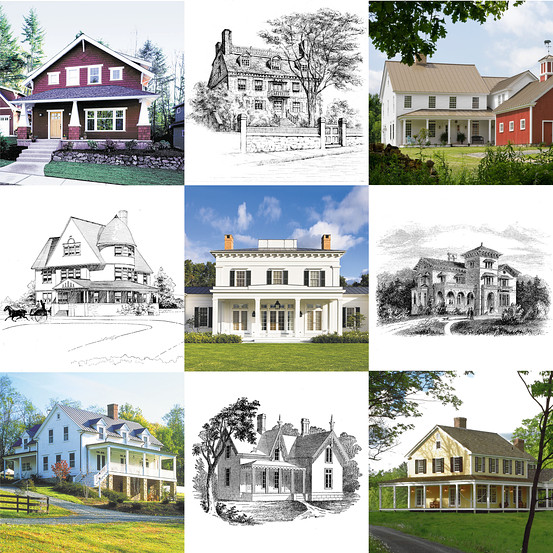 "The first words that come out my clients' mouths are, 'We'd love to have a real old house. We just can't find one,' " said architect Russell Versaci, who runs a Middleburg, Va.-based practice. "And the second thing they say is, 'We are so sick of McMansions. We just want to get out and get back to reality.' "

What architects like Mr. Versaci—along with certain discriminating prefab builders and house-plan companies—offer instead is known as the New Old House: a sanely proportioned residence that's historically accurate on the outside, but conceived for the needs of modern Americans on the inside. Austere Greek Revival farmhouses with roomy island kitchens. Time-travelesque Craftsman bungalows with startlingly open floor plans. Walk-in closets designed to hold more than a few Civil War-era muslin petticoats.

Photos: History in the Remaking 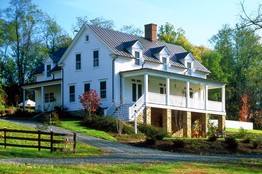 To ensure that the exteriors of these New Old Houses have architectural integrity—unlike the pastiche of styles that can make vast McMansion facades seem phony—their designers often pore over builder's guides and house-plan collections from the 19th and early 20th centuries. An exhibition of these telling artifacts, "Selling the Dwelling: The Books That Built America's Houses, 1775-2000," is currently on display at New York's Grolier Club (through Feb. 7).

The exhibition is timely. According to Amy Albert, editor of Custom Home—a Washington, D.C.-based magazine that caters to architects, designers and high-end builders—a hankering for authentic traditional residential design is one of 2014's big trends. That said, "People aren't seeking exact replicas of historical houses," she added. "They want architectural purity in the elevations and the details, but inside they want connectivity and open floor plans." Discerning homeowners, she said, are demanding that custom builders bone up: "Mixing a Palladian window with a Craftsman column is not going to cut it. Even if people don't have the vocabulary to articulate why it's wrong, they instinctually know it is."

In the mass-market house-plan industry, too, schemes for midsize houses that sensitively evoke other eras are selling well. And this despite media proclamations that the sprawling McMansion is "back." (It had been declared dead during the recession as the average size of new houses shrank, but, by the second quarter of 2013, that figure rebounded to a record 2,642 square feet, according to the Census Bureau.) "Calabash Cottage," a 2,553-square-foot home, ranked fourth among last year's 10 most-popular house plans from Hanley Wood, a heavyweight in the plan business. It's encircled by a delicate porch, distinguished by a simple roofline and unencumbered by a hulking, front-and-center garage (a two-car model is tucked into a rear wing). Still, even this "cottage" features a vaulted Great Room for homeowners to get lost in. And it should be mentioned that Hanley Wood's two top-selling plans are far-from-reverent interpretations of Arts and Crafts design.

“'People think it's all about moldings, but it's really scale and proportion.'”

One thing that draws his clients to the more rigorous authenticity of a New Old House, said Mr. Versaci, is a search for what he called the "psychic comforts of yesterday," a concept of the past that's happier and less disposable than life in 2014. "People have visceral memories of their grandmother's house," he said, "the slamming of the door, sitting on the porch watching cars drive by, sitting down to Sunday dinner when Sunday dinner was a big deal."

Coincidentally, New York architect Gil Schafer, another well-known practitioner of the New Old style, said he gravitated toward it largely because of childhood days spent in his own grandmother's house in Georgia, where a garden-facing porch connected the multiple wings. This open-air passageway offered the only route from the living spaces to the bedrooms, even in a hailstorm or on chilly mornings. "It was strange but wonderful. You just experienced this sense of nature," he said, "the smell of climbing roses and jasmine and the pine logs in the fireplaces."

"Memories are an underrated idea in terms of making people feel comfortable," said Mr. Schafer. And in an ersatz McMansion, he added, "that sense of home is even more elusive because the scale of certain rooms makes it impossible to get intimate."

Interactive: What's Wrong With This Picture? 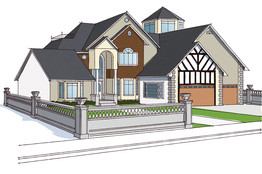 Illustration by Arthur Mount for The Wall Street Journal

Mr. Versaci said that several of his clients who formerly lived in 7,000-square-foot McMansions quickly grew discontented with their homes' contrived, echo-chamber grandeur: "After they got over the initial joy of having bragging rights, they looked at the house and said, 'This doesn't look right. It's sterile and it's not us and we don't want to live this way.' "

If authenticity's the goal, why not buy an old old house, an actual period piece? Many people try, only to find that these real-deal houses are next to a highway, or dilapidated beyond repair, with 7-foot ceilings (built low to conserve heat) and tiny kitchens designed for servants, not impromptu gatherings of children high from a soccer victory who've been promised s'mores.

There are at least three ways to get a design for a New Old House: Hire an architect known for strict traditional work; customize a quality prefab scheme that's largely built before it reaches your site; or buy a stock "historic" house plan online and find your own contractor. The latter route is the cheapest but iffiest. Many such commercial plans—by draftsmen, not architects—are questionable, if not cartoonish, takes on period homes.

"The problem," said Richard Cheek, curator of the "Selling the Dwelling" exhibition, "has always been: Who supplies the working plans for a house? The architect or the builder?" The exhibition traces the tug of war for control between the two professions that unfolded over the last 200 years. "When architects got organized after the Civil War and began charging 5% of the final construction costs for their drawings," Mr. Cheek said, "builders started to say, 'No, we'll provide you with designs free of charge.' " Architects campaigned for building codes that, for "safety reasons," required a licensed architect to design and sign the drawings. "In Massachusetts, for instance, that's still true today," he said, "but only for buildings over 30,000 cubic feet." That is, structures bigger than the average home. 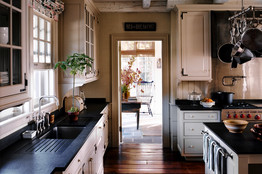 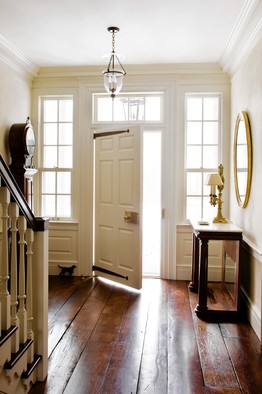 In 1994, Life magazine proved that, despite the marketable mediocrity of developers' "traditional" house plans, Americans craved more. The editors approached elite "modern traditionalist" architect Robert A.M. Stern and his associate Gary Brewer (now a partner at Mr. Stern's firm) to design a "dream house" for Life's readers: a 2,200-square-foot shingle-style house that could be modified to 3,000 square feet. The magazine's cover declared it was "classic on the outside, remarkable on the inside—and affordable." In the first year that Life sold construction drawings for this proto-New Old House, said Mr. Brewer, "it was the number-one-selling house in the house-plan industry." You can still track down the plan (via Southern Living magazine's website), and Mr. Brewer estimates that up to 8,000 copies have been sold. This famous example of doing-it-right aside, most plan companies continue to produce drawings that bloat and compromise traditional design. "Sadly," said Mr. Brewer, "they don't understand the grammar and the character of traditional houses [well enough] to do ones that are, say, more literate."

There are exceptions. The Bungalow Company, based in Bend, Ore., designs and sells stock plans for classic American Craftsman Bungalows—modest homes with low-pitched eaves and stocky porches that evoke dwellings from the 1920s. Co-owner and designer Christian Gladu put in hours pacing off the lots of original Craftsman houses in Seattle and squinting at vintage plans from companies like Radford and Sears, Roebuck & Co. But his houses, which cost between $175 and $225 per square foot to build (developer houses average $100, he said) update those models' floor plans. "I'll go on record," he said. "The original bungalow plans were not very good. They're often dark, they weren't built on foundations so they sag and the rooms are very closed off. Opening them up definitely works."

In the high-end prefab category, Connor Homes in Middlebury, Vt., specializes in neoclassical New England and mid-Atlantic architecture—both custom designs and plans from their catalog. To find inspiration for their first Greek Revival model back in 1985, president Michael Connor and his wife, architectural designer Linda Connor, drove around rural Vermont in a pickup truck until they spotted the ideal vintage farmhouse. With the bemused owner's permission, they set up their ladders and spent half a day measuring it, even as the skies poured rain. "People think it's all about molding and detailing," said Mr. Connor, "but the most important thing is scale and proportion. If you get that right, the rest falls into place." 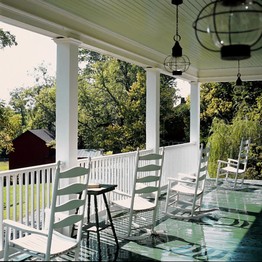 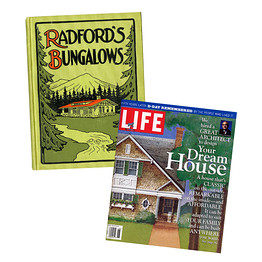 In its 118,000-square-foot facility, Connor Homes toils at what's called "panelization," prebuilding walls up to 14-feet wide with the aid of computer design. It also constructs all the cabinets, historically accurate windows and modillion cornices for New Old Houses, many moderately sized, that average $200 per square foot. The components are shipped by tractor trailer or rail to the building site and finished by local contractors. Even with extra shipping costs, panelization saves time and money and is more precise than increasingly expensive on-site building, said Mr. Connor: "Traditional architecture is probably going to be saved by robotic carpentry."

If money is less of an object, of course, you can hire an architect like Mr. Versaci, whose custom New Old Houses start at $350 per square foot to build but can run into "the thousands," he said, or Mr. Schafer, who quoted an average cost of $650 per square foot. To find a worthy architect, consult the professional directory at the Institute of Classical Architecture and Art's website.

Both Mr. Versaci and Mr. Schafer acknowledged there's something potentially inauthentic about recreating oldness, especially if you go to the extent of simulating patinas on stone (using coffee) or, as Mr. Schafer mentioned, importing $50,000 mature beech trees so your New Old House's landscaping doesn't look too new. "Making a mirage is an issue," said Mr. Versaci. "My personal preference is to let a house age through natural processes. If you choose quality, natural materials like unlacquered brass, they will eventually age. But some 21st-century Americans, who are used to 'add water and serve,' just don't want to wait."

Still, with design rooted in America's greatest architectural hits, with columns whose proportions are calculated from 19th-century formulas, the best New Old Houses are likely to be keepers, unlike most monster homes. "A house should be built to last at least 100 years," said Michael Connor. "And beauty is part of what makes a house stay on the landscape. If it's beautiful, it will be loved and taken care of. McMansions aren't loved and they won't be taken care of."